Getting Started with 360-Degree Photography

The rise of 360-degree photography has brought about an astonishing phase of innovation in the world of the imaging and photography. Producing a great photograph used to be a process of pointing your camera at something fascinating, and shooting at the right moment. It used to be all about the photographer and his perception and art.
But what if the people seeing your photographs could virtually stand where you stood before you operated your camera’s shutter release? What if they can look around, fully let that scene sink in? 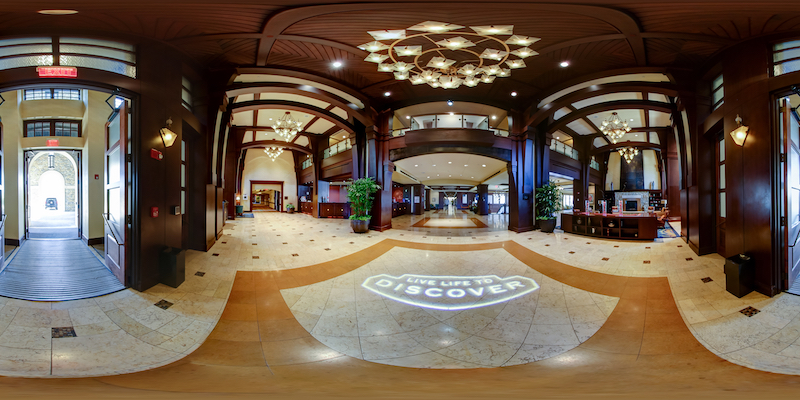 360-degree panoramas do just that. It is a new, distinct and thrilling way to let your viewers explore your photographs. If you have explored around using Google Street view, or have seen real estate listings with a “virtual tour”, imagine capturing this type of interactive photos on your future adventures!

360-degree photography used to be tough to capture and post-process just about three or four years ago. With advanced imaging solutions and virtual software tools to accompany them, it is no longer difficult to compose some virtual experiences of your own. The only catch is that you have to start to think 360 degrees, not just about what is in front of you!

With that being said, here are some handy tips on how to start shooting 360 degree photographs.

1. CHOOSE THE RIGHT LOCATION FOR YOUR 360 DEGREE PANORAMA:

There is no more significant concern with a 360-degree photo or video than its positioning.
There is no easy way to frame your image, other than using the initial position as a frame to direct and capture attention.
To make it harder for the conventional photographer – there is no focusing to draw attention towards certain fragments of the photo either.
Loved your 100mm, f/2.8 lens? Sorry, you might need to get over it!

Whatever the strategy you use to capture or direct the viewer, you need to shoot in a location that is inherently interesting, thereby fascinating the viewer to look around in all directions to make the most of his experience.
You will have to use a wider field of view. A 360-degree camera would typically use two fisheye lenses and software to auto stitch two images together. Fisheye lenses are generally ultra wide-angle in nature, so they tend to “push the subject to a distance”.

It therefore becomes important to ensure that subjects of interest are in the foreground and not far away from the camera. Rather than trying to capture a wide range of depths, try to choose a location where there are subjects in the foreground. It could be buildings or people. This is necessary for the ‘little planet’ mode used so often with 360-degree photography, but also for inverted shots where the sky is a sphere in the centre of the photo.

Best part (sometimes the worst!) of shooting 360-degree photos is that you do not have to focus on anything in particular. For the most part you just need to place the camera right and think no more of it – which makes placement extremely important.

The placement of the camera depends on the kind of product and the technique that you are using.

3. CREATING A UNIQUE POINT OF VIEW:

360 degree panoramas are all about composing a view that you experienced yourself. The point of view should be unique.
It is always good to have a vantage point in your photos. You can then frame your photo well if a part of it only contains closer subjects and the other part contains a stunning view.

For instance, you could think of attaching a 360 degree camera to the side of a helicopter, which will allow the viewer to feel like they were actually in a helicopter. They can turn within the image viewer and look back at the passengers sitting inside, while experiencing the view on the other side.

For places of tourist interest, architecture, real estate, and other subjects where viewers would be interested in “experiencing and exploring”, it is a good idea to fit the 360 degree camera at head level. To make the experience realistic, you might also want to leave your shadow in the frame if it is a blog and helps with composition. This lets them explore the place as if they were standing there themselves.

For artistic shots, there is no limit as to where and how you shoot your photos. Placing the camera on the ground can create unique shots, but it makes things difficult because you have to get yourself out of the scene sometimes… and 360-degree images make it tough.

Finally, don’t forget to inspect your surroundings! As the camera picks everything in all directions, you may have to spend hours with a healing brush and clone tool to fix that accidental shadow or backpack.

It cannot be stressed enough on how important a tripod is for 360-degree photography. It is hard to shoot even a regular panorama without a tripod!

There are few reasons for investing in a tripod – the first one is quite obvious: you can get the camera off the ground and on to other surfaces without standing and obstructing the view.

But the biggest reason is that it will provide you with a way to raise the camera up in the air to take the shots, eliminating yourself from the shots. Lifting the camera up without a tripod can be a nightmare, the lens may stick out and if it does topple over, it is going to land glass-first. The best you can get is your disfigured fingers in the frame.

Not only does the tripod give you some extra height (which is a big advantage); it also moves the camera’s dead zone significantly far from your fingers.

Most 360 cameras have certain areas that are not present in the final image (dead zone or blind spot), generally around the camera mount itself. For example, the Ricoh THETA eliminates itself entirely from the image. If you hold the camera by hand, it can cover and distort your fingers very strangely.

Finally, there are a few tripods which will make your work easier, like the Gorilla pod. It is flexible in nature and can grip on to things (like railings). It is small in size and cost, get one!

5. MAKING IT EASY FOR THE VIEWER:

Building 360 degree content is all about lingering on the subject and letting the viewer explore the scene by themselves. Recording jumpy 360 videos or poor stitching with moving subjects getting ghosted all over the scene is not pretty. Wait for the perfect moment. Remember that subjects in the foreground matter the most, the finer details of the background will not be too relevant for the viewer and can be edited out easily.

Last but definitely not the least is the editing work. A little Photoshop can go a long way with you. No doubt Adobe’s Photoshop is quite slow to use on high resolution 360-degree panoramas shot with DSLRs. It still provides you with a lot of great adjustments to give your photographs a bit more of a pop.
On Photoshop for phones, de-fog and sharpening tools can be very useful with panoramas. The important aspect to note here is that the phone app does not mess with the format of the photograph and social media platforms will still recognize the image as a 360-degree panorama.

No reason not to try out some 360-degree photos on your next trip!

However, if you ever get stuck and need some nice 360 photography of a lovely beach or building, photoshopped and all, there’s a great website to check out that has brilliant 360º stock photos called Dreamstime, give them a try if only for some inspiration 🙂

Leave a reply Click here to cancel the reply

©2020 my360propertyvirtualtours.com was brought to you by Plush Global Media - All rights reserved